Adhering to Article 5 of the IHRA’s fundamental document, the Stockholm Declaration, where IHRA members share the commitment “to encourage the study of the Holocaust in all its dimensions”, and inspired by the special Greek tradition in regard to the humanitarian education, the Greek Presidency has set Teaching and Learning about the Holocaust as its primary theme and goal.

Building on IHRA’s enduring and fruitful engagement to promote and evolve effective Holocaust educational practices, an engagement which has bore great fruit like, most recently, the Recommendations for Teaching and Learning about the Holocaust;

Accounting on Education as the primary weapon in combating hateful ideologies, thus preserving pluralistic societies and democratic values, as well as the memory of the victims and survivors of the Holocaust;

Deeply and strongly believing that Education is the onset of our moral commitment for a world with no more genocide;

The Greek Presidency of the IHRA 2021 intends to devote the highest of its efforts aiming at the broadening and deepening of this field, by taking initiatives like Special Discussions among Educators as well as empowering ongoing efforts like the yearly school video competition on the Holocaust, organized by the Greek Ministry of Education and the Jewish Museum of Greece.

IHRA’s action taking on the crucial field of Education.
IHRA’S Recommendations for Teaching and Learning about the Holocaust. 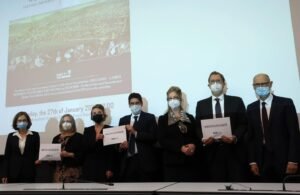 Thematic commemoration ceremony by the Embassy of Greece in Switzerland 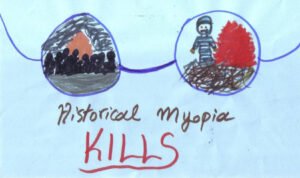 How the IHRA Recommendations for Teaching and Learning about the Holocaust Can Help You? A transnational workshop for educators

The IHRA Chair, Ambassador Lazaris, participated at the webinar “Holocaust Education and Remembrance. Keeping up with the digital age” hosted by the EU Parliament