Around 200 delegates, experts and observers from the 34 member states of the IHRA attend the Athens Plenary to discuss politically relevant issues related to the Holocaust and the genocide of the Sinti and Roma.

Committed to the principles that inspired the assumption of the annual IHRA Presidency by Greece in April as well as to its priorities, the Greek Presidency is hosting in the Athens Plenary the IHRA’s experts and political representatives who will focus their efforts on countering Holocaust distortion and safeguarding the historical record. Our common aim is to strengthen the moral commitment of societies and to combat growing Holocaust denial and antisemitism. 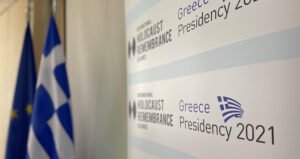 The IHRA on the conclusion of the Athen’s Plenary 2021

Summing up the Athen's Plenary, the IHRA underlined the condemnation of recent antisemitic violence and hate speech and the advancement of education on the genocide ...
Read More 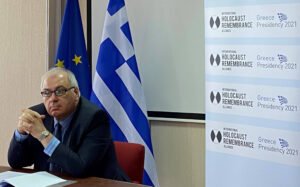 In the context of the Athen’s Plenary proceedings, the following statement was agreed upon unanimously:

In light of the grave acts of antisemitic violence that ...
Read More

The Greek Presidency welcomed the Republic of Cyprus as a new Observer Country at the IHRA, since the IHRA Athen’s Plenary meeting approved the application ...
Read More

“It is my privilege to welcome today to Athens, the participants to the first Plenary of the Holocaust International Remembrance Alliance under the 2021- 2022 ...
Read More

“Distinguished delegates of the IHRA member countries, I warmly welcome you to the online Athens Plenary Meeting in the capital of Greece, a city with ...
Read More

I do hope the video you have just viewed has enticed you to ...
Read More